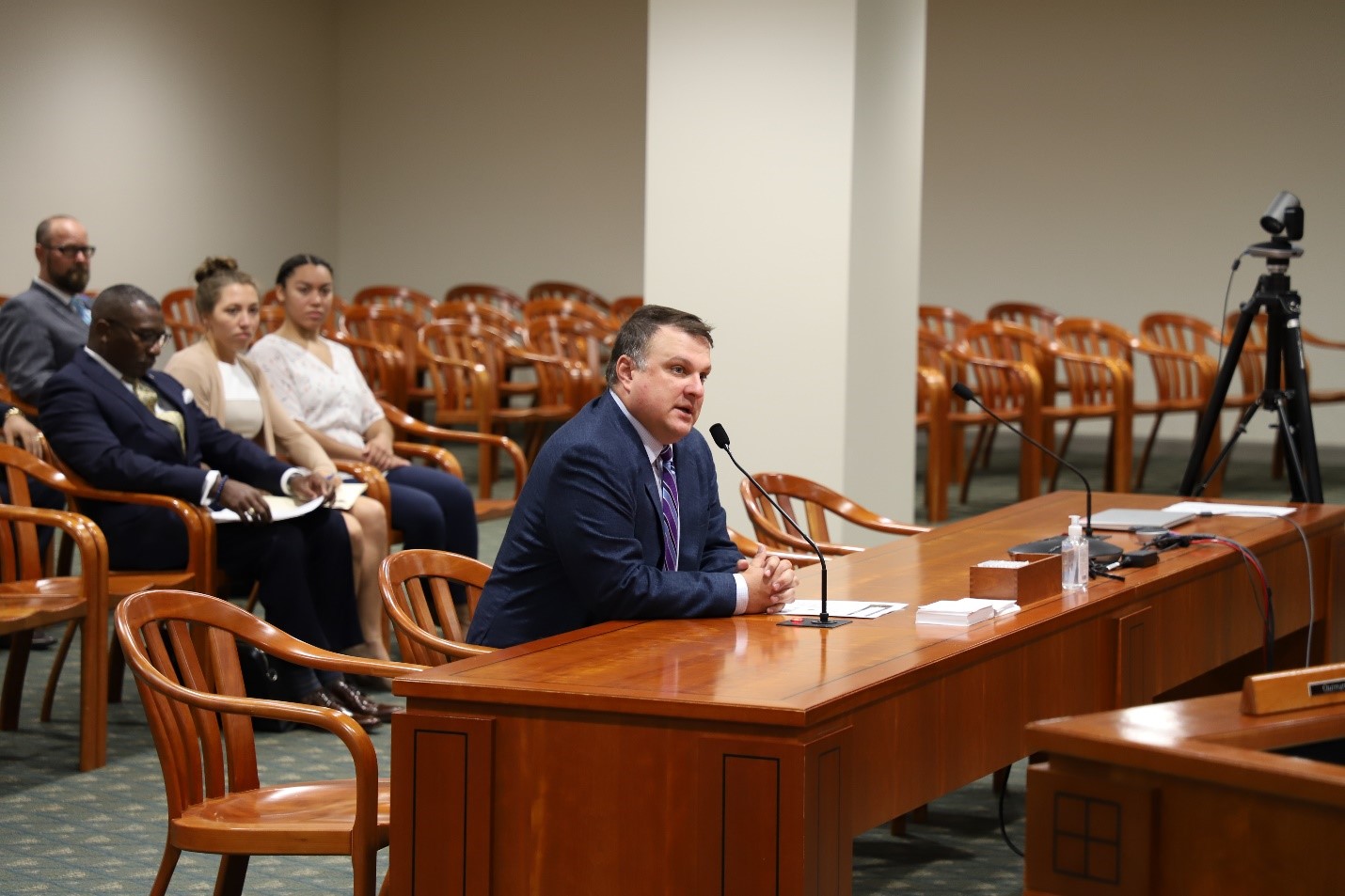 State Rep. Matt Hall, of Marshall, provides testimony on House Bill 4711 before the House Regulatory Reform Committee on Tuesday, Sept. 14. The legislation is now Public Act 116 of 2021 after being signed into law by Gov. Gretchen Whitmer on Monday.

A new law spearheaded by state Rep. Matt Hall will boost local economies by clearing the way for a pair of expansion amateur baseball franchises in Michigan.

The Battle Creek Bombers and Kalamazoo Growlers of the Northwoods League operate near Hall’s House district in Calhoun and Kalamazoo counties. The collegiate summer baseball league, which was founded in 1994 and currently consists of 22 teams across the Midwest, features players with NCAA eligibility who are participating as amateurs.

House Bill 4711, now Public Act 116 of 2021, allows conditional liquor licenses for baseball stadiums at Eastern Michigan University and Oakland University as the league plans to establish new franchises which will use the stadiums for their home venues. The liquor licenses will only be implemented for summer league games.

“The Battle Creek Bombers and Kalamazoo Growlers are important parts of our communities and provide people with recreational activity in the summer,” said Hall, of Marshall. “Having more teams in the state will allow them to be more successful. They won’t have to go as far away to play games and keeping things local reduces travel expenses.

“Alcohol revenue is crucial to minor league and amateur baseball. People want to be able to have a beer when they go to a ballgame. It’s part of the tradition and the revenue from that helps these teams remain viable.”

Sam Gilbertson, who represented the Northwoods League in testimony when the legislation was before the House Regulatory Reform Committee in September, underscored the massive impact local teams have on area businesses. Gilbertson pointed out those who attend games often frequent establishments and shops around stadiums and throughout communities. Gilbertson said the league drew roughly 1.3 million fans this season.

State Rep. Matt Hall has worked to uncover the full scope of money squandered by Gov. Gretchen Whitmer’s unemployment agency due to fraudulent payments while delivering accountability to Michigan taxpayers. Following a joint House-Senate Oversight Committee hearing this week with agency officials, Hall stressed the need for continued transparency and reforms to ensure the system […]

Lawmaker logs flawless attendance as voice for people in Calhoun, Kalamazoo counties State Rep. Matt Hall, of Marshall, completed his third consecutive year in office with perfect attendance, taking part in all 640 roll call votes during the 2021 legislative session. “People across Calhoun and Kalamazoo counties chose me to be their voice. That means […]

House Tax Policy Committee Chair Matt Hall, of Marshall, today highlighted recently signed legislation which cuts taxes for small businesses throughout Michigan. House Bill 5351, which became Public Act 150 of 2021 when it was signed into law in December, increases the value of the eligible manufacturing personal property tax exemption from $80,000 to $180,000 […]